PC/104 is an industry standard which defines a mechanical and electrical specification for rugged small form-factor computer systems. Boards follow a 3.6" x 3.8" size and connect together using a stack-together bus arrangement. Simply mix and match processor and peripheral hardware to meet your requirements. Advantages include accelerated time-to-market, lower development costs, design flexibility, multi-vendor support and the ability to use standard PC software. These important attributes have made PC/104 a long-established choice for demanding applications including Industrial Control, Military, Medical, and Aerospace. 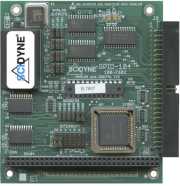 Improved reliability while reducing system cost and complexity is what the GPIO-104 is all about. Many PC/104 embedded systems need both Digital and Analog Input / Output capabilities. This can be done with multiple specific function boards but system cost and size can suffer. Our GPIO-104 combines the most popular peripherals in one board. 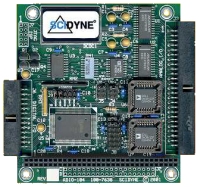 The ADIO-104 builds on the popularity of the GPIO-104 by doubling the number of Analog Input and Outputs channels. The digital I/O is also enhanced by the inclusion of four dedicated MOSFET open-drain outputs, ideal for directly driving 24VDC relays or LEDs. 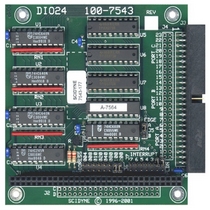 If your PC/104 application needs to connect to Solid-State I/O, LEDs, Relays, Switches or similar external devices the DIO24-104 is a proven solution. Each of the 24 digital channels can be software configured to operate as either an Input or Output.  Specially designed output stages provide high sink current capability. 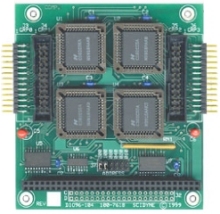 Applications requiring a large number of digital I/O will benefit from our DIO96-104. The board is based around the venerable 82C55A Peripheral Interface chip which provides three 8-bit bi-directional ports (24 digital I/O). The DIO96-104 uses four 82C55A chips for a total of 96 bits of digital I/O. Each chip is routed to its own 26-pin IDC header for easy system integration. 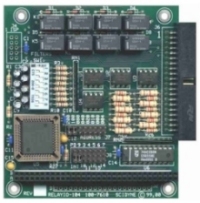 The RELAYIO-104 is an 8-bit digital I/O peripheral module offering electrical isolation between the host and externally connected devices. It conforms to the PC/104 standard and operates on a +5V only power. A single 40-pin I/O header is used for all external wiring.

Embedded applications often involve the controlling and sensing of various external AC and DC signals while also requiring electrical isolation for the host computer. External solid state relay racks or similar devices are often considered but can be too bulky in many situations. The RELAYIO-104 allows field signals to be brought to the PC/104 system. It has the flexibility to accept combinations of AC and DC signals and offers 250V host-to-field isolation. 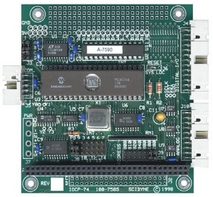 The IOCP-74 is a user configurable I/O processing sub-system for PC/104 bus computers designed to relieve the host from performing rudimentary I/O operations and offers fast front-end response demanded by many real-time systems. 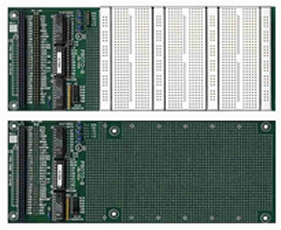 Have you been searching for a particular PC/104 function but can't find the exact hardware anywhere? Build-It-Yourself! The PROTO-8 is a breadboard specifically designed to help create and develop PC/104 circuitry.

The PROTO-8 available with or without a solderless breadboard and the extended length allows ample room for constructing custom circuitry. All PC/104 signals are clearly labeled and easily accessible. Critical signals are buffered. 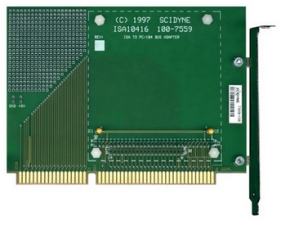 The ISA10416 is a half-size ISA card that allows 8-bit and 16-bit PC/104 modules to be used in a legacy ISA bus computers. In operation, a PC/104 module is installed on the ISA10416 card and the card is then inserted into one 16-bit slot within the PC ISA host.

The ISA10416 transparently performs a direct bus-to-bus conversion and operates at the full speed of the PC ISA host. All the facilities of the host computer are available to the PC/104 module including memory and I/O operations, DMA and interrupts. In addition, a through-hole prototyping area is provided for the construction of experimental and application specific circuitry.